I’ve been using LiveScribe products since April ’09 and consider myself a heavy user (filled seven journals, ~100 interviews and conversations recorded). I’m still using the first generation pen, the Pulse 2GB which still works perfectly fine for me. The new one is the Echo, which is available in 4GB (~$150.00 USD) and 8GB (~$200.00 USD)

Buy one and try it out. It’s not a lot of money for how useful you’ll find it.

How does it work? 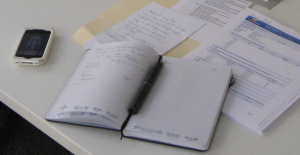 What’s it good for?

What do you think?

If you also use LiveScribe products, please leave a comment. I’d be interested in hearing about your experiences so I can learn more about what other people are doing.